We can only marvel at the amazing journeys taken by seafarers of old who predated the inventions of the industrial age. The Polynesians are understood to have regularly made long ocean voyages navigating by stars, winds, currents and possibly even floating organic materials that signified a particular island's proximity.

For all people of the Pacific, the legendary, but none the less completely true, arrival of the Polynesian forebears of the Maoris, from Hawaiiki around year 1400, to Aotearoa - The Land of the Long White Cloud - (later renamed New Zealand), is a magnificent example of these feats.

With the industrial revolution and the rise of particularly, the British Empire, successful command of the seas was primarily dependent on safe navigation. Safe is a relative term here, as the primitive nautical instruments and their concepts of operation using dead reckoning, often proved inadeqate, leading to the loss of many ships. Notable of these was the 1707 Scilly Naval Disaster where the inability to compute one of, or both longitude and lattitude, with sufficient accuracy was cited as the primary cause of this tragic event.

This lead to the Longitude Act of 1717 with it's prize for a marine chronometer with sufficient accuracy to overcome the limitations described. This signalled rise to fame of the then Barrow-on-Humber inventive clockmaker John Harrison who designed and created the first successful "Sea Clock", the forerunner of the modern marine chronometer. As with so many great creators, he was supported by other significant characters; in his case, he was championed by the then Astronomer Royal, Sir Edmund Halley (as in Halley's Comet), who understood Harrison's brilliance while Harrison had difficulty explaining his ideas to others himself, and financially, by the watch and instrument maker George Graham.

What has this to do with us today? Well, like most sea people, we are facinated by this hard-won history and while some of us may be fortunate enough to visit the Royal Observatory Greenwich and see some of the actual Harrison Sea Clocks, we can all get great use and pleasure from modern versions of marine or ships clocks.


Now, we don't have to spend the 30% of the ship's value that was the cost of one of those very early examples. The fine Wempe and widely-respected Plastimo brand and others offer fully functioning and decorative ships clocks, including radio-room and tide clock types, in both traditional and contemporary styles, that will grace either your boat or home.

The Wempe Regatta with it's Corum-designed code flags (each flag is a recognised code flag number) as hour markers is one of our favourites.
These are all a long way from the events of the 1700's that led, from John Harrison to our digital world, but we all owe a debt of gratitude to him and the great subsequent collective history of ship's clocks that keep accurate time, in navigation.
Posted by ifloat at 2:31 pm No comments:

We of the marine leisure world take the annual obtaining of the latest Reeds Nautical Almanac as natural marker of one's sailing intentions for the forthcoming year.

The reference to a publication of astronomical information, can be traced back to Babylonian times with the ancient Greek Democritus writing the first written almanac titled the "Parapegma". Calculations were accomplished by use a type of stone tablet inscribed with days of the month that could hold a wooden peg and and so produce the results according to current or future time (the precursor to our digital tablet computers?). Ptolemy later wrote his Phaseis  - meaning "phases of fixed stars and collection of weather-changes" giving the origin to the type astronomical data we use today we use for navigational purposes.

In the world history mathematics and of navigation, the Arabic people naturally feature and their Zij, used for medieval Islamic astronomy, was likely the basis for Ibn al-Banna (1256-1321) and his "al-manakh" meaning "weather". This is not considered a pure Arabic word of old, but one having Arabic-Spanish origins - quite possible as al-Banna spent most of his life in Morocco which also had strong connections with Toledo, Spain. It is from here that the West really became aware of the advanced knowledge of the Arabic scholars, particularly mathematicians, who provided the basis for modern mathematics. In 1267 Roger Bacon used two spellings: "almanach" as well as "almanac".

The first incarnation what is now the modern nautical almanac was the publication in 1766, by the 5th Astronomer Royal Rev. Dr. Nevil Maskelyne who became an ex-officio member of the Board of Longitude. As they were focused on lunar navigational methods they clashed with the mechanical methods of John Harrison and his Sea Clocks; in the end Harrison was paid his prize for producing a clock of proven accuracy at sea by an Act of Parliament, not the Board of Longitude. Much later, in 1846, the United States published "The Nautical Almanac", which, from 1958 has been done in full collaboration with Her Majesty's Navigational Office, both of which remain as annual nautical publications. 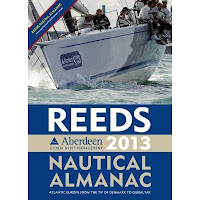 While the US and UK Governments produce annual almanacs primarily for military and commercial mariners, A and C Black, through their brand Reeds, publish a range of nautical almanacs for the leisure boater. The Reeds brand too has a long history. First published in 1932, it has appeared with constant improvements and additional information sections for 80 years however the current format and style was developed by Macmillan publishers, who held the brand for ten years up to 1994.
The the world's oldest current encyclopedia, Britannica, first published in Scotland in 1768, has just gone fully digital, Reeds introduced their first digital version in 2011, which is also fully accessible to users who buy the hard copy version - the best of both worlds for the price of one.

The suite of Reeds almanacs has grown over the years; now there are four titles, some with different formats. Nautical almanacs - born 1766 - yours, digitally, 2013. (Information drawn from Wikipedia, A&C Black)
Posted by ifloat at 11:43 am No comments: